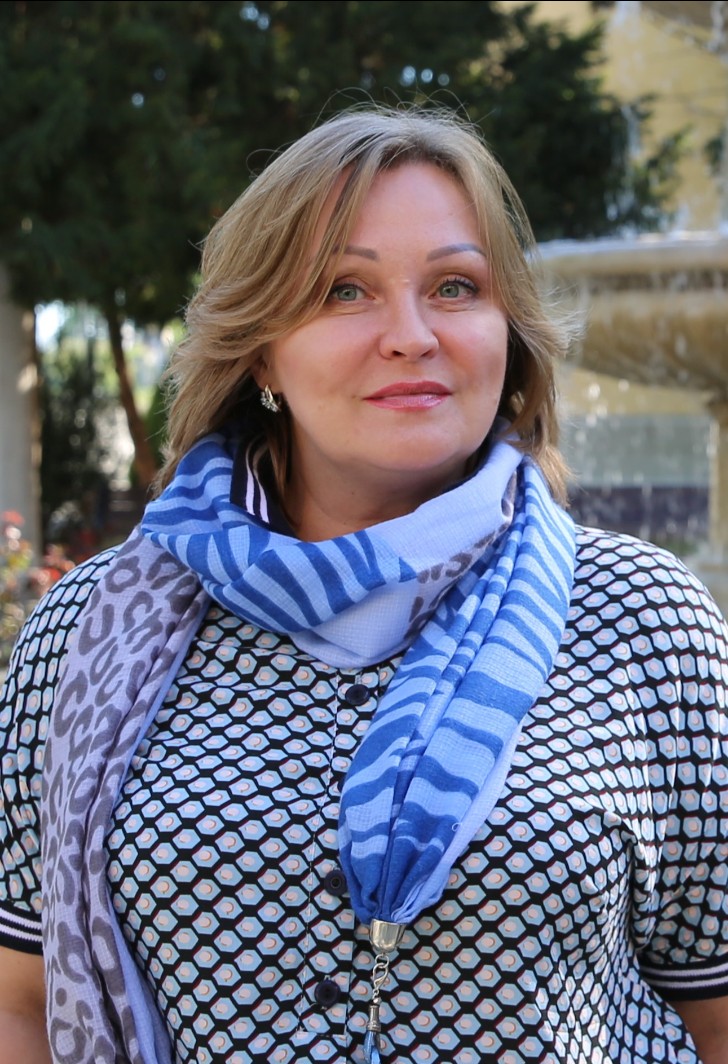 Since 2018, she has been the head of the Federal State Budgetary Institution of Culture "State Historical and Archaeological Museum-Reserve "Tauric Chersonesos". In 2021, she was awarded with the Gratitude from the President of the Russian Federation V. V. Putin for her contribution to the strengthening of Russian statehood and active community work.

In 1993, graduated from the St. Petersburg Cinema-video-technical College with a degree in technical economics. In 2006, graduated from the St. Petersburg State University of Culture and Arts and received a degree in museology. In 2008, she received professional retraining at the North-Western Academy of Public Service in frames of the program "Municipal Administration and Municipal Service". In 2020, entered the postgraduate course of Sevastopol State University, choosing the topic of scientific research "Cultural and historical formation of family policy in the system of Russian statehood".

From 2002 to 2014, coordinated excursion and exhibition activities in the State Museum Agency of St. Petersburg, which included 29 branches — state museums. Having headed the department for organizing exhibitions and excursions at the Smolny exhibition hall of the Leningrad Region Government, Elena Alexandrovna became a curator and consultant of projects within the framework of cross-border cooperation and hospitality programs, as well as annual socially significant projects aimed at supporting creativity and adaptation of people with special needs.

Since 2017, she has held the position of Deputy General Director for Scientific, educational and exhibition activities at the St. Petersburg "Museum and Exhibition Center".

Elena Alexandrovna participated in the creation of the museum and exhibition center itself, on the basis of which the multimedia historical museum "Russia — My History" was opened in St. Petersburg. She developed the concept of the development of the IEC, worked out the areas of activity, formed the structure and built partnerships in order to popularize the history of Russia, historical science in general, preserve the integrity of the historical memory of our people and create a comfortable environment for working with the younger generation within the framework of moral and patriotic activities. Initiatives of E. A. Morozova have implemented many historical and cultural projects, such as: the festival "Family as a hymn of love", "I remember! I am proud!", "Together we can do a lot" and many others.

She has many certificates and commendations of various structures of the Government of the Leningrad region and representative offices of other regions.

During the period of work in the State Historical and Archaeological Museum-Reserve "Tauric Chersonesos" has made a significant contribution to the preservation of cultural heritage sites. On her initiative, a department for spiritual and educational education was created in order to form a historical and patriotic education of young people, special thematic excursion routes dedicated to the spiritual heritage of the country, temple architecture and the dissemination of the history of Christianity were developed, as well as cultural and educational programs and festivals aimed at improving the image of the museum-reserve, attracting more guests and tourists. The Museum-Reserve began active interaction with educational institutions of the city of Sevastopol and prepared a base for conducting electives and practices of students of higher educational institutions of Sevastopol and Russia. Morozova E. A. initiated the development of a new concept for the development of the museum-reserve, including work on the creation of an International Archaeological Center and the museumfication of the objects of the Chersonese Choir as a resource for the development of archaeological science and the tourist potential of the museum-reserve.