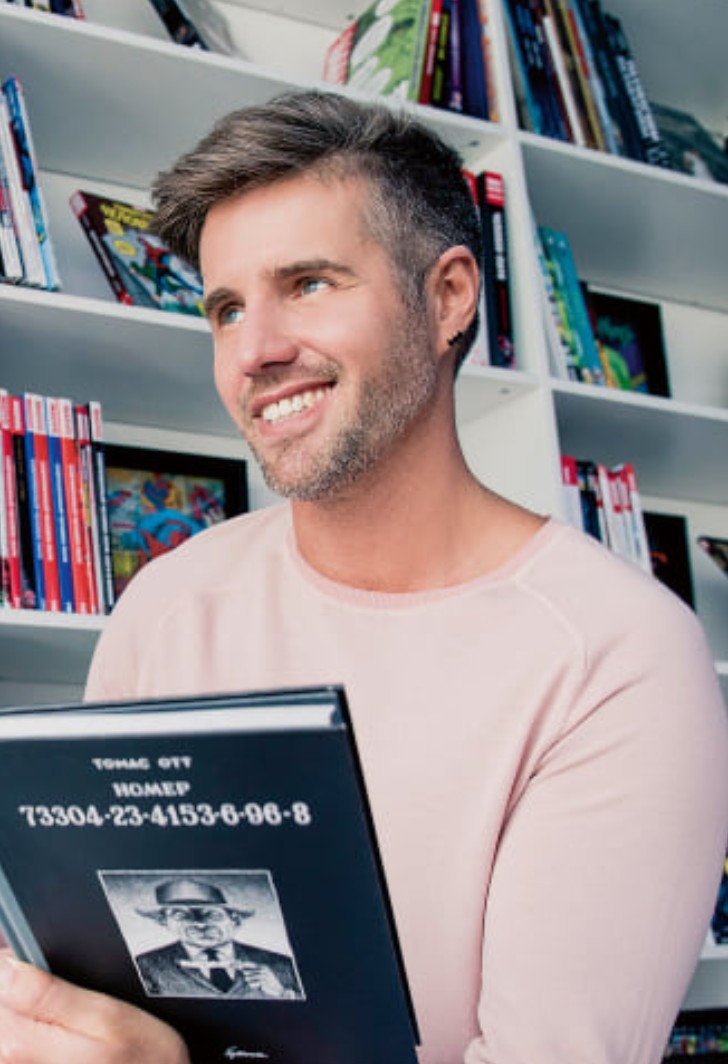 He was born in Tula. Andrey began to manifest interest in comics already at his early age. In the nineties, comics were in limited supply in Russia. They could perhaps only be obtained in Moscow or Saint Petersburg. For Tula, comics were an unseen beast. And their assortment was concentrated on the Bible in comics and chaotically appearing comics about Bamsey the bear or subscriptions to comics about Mickey Mouse and the Duck Tales. Running around all the points where periodicals were sold, Andrey tried to get some new comics, collecting everything that could somehow relate to comics culture.

Later there were the noughties and the universities, as well as the first licenses for superheroes from the publishing houses Egmont, Rovesnik and IDK. DC Comics and Marvel superheroes appeared on the shelves of the domestic retail.

After the university, Andrey worked for five years as an economist in the field of customs regulation.

Later he went to freelance. He painted to order the illustrations for advertising in Moscow, for periodicals, books and some European customers. Studying the background of the comic, the history of its formation in different countries, from the USA to Japan, without passing by Russia, France, Italy and Europe in general, Andrey came to the conclusion that so much information, important dates, names should not be only part of his information baggage, and decided to start a course of lectures. But the work made its adjustments, and the lecture plan had to be forgotten for a while.

However, after some time, Andrey received a fateful call from the director of the library named after A. A. Akhmatova. Vladimir Kosarevsky offered to take part in the charity project by becoming a volunteer. The project aimed to help families with special needs children to provide them with a good rest. While the parents are resting, the project works, teaches, is engaged with the children, conducts master classes, etc.

At the end of the project, the director of the library invited Andrey to take part in Biblionoch, the project created in response to Night at the Museum, which suddenly received a warm welcome from the Muscovites and became one of the most popular and anticipated day in the Russian libraries.

Later there was a project Biblio-Laboratory, which was launched on the Winzavod Contemporary Art Center territory. A real library was deployed on the project site. It was this platform that became kind of start of the "Let us collect the comic library" project. The project's goal is simple: everyone who wishes can transfer any amount of money to the account, and the comics will be purchased with this money; you can also bring your own comic books, and they will be included in the general fund of the library. Over three years of the project's work, about 2.3 million rubles were raised, and over 3 thousand comic books were purchased.

After the project, Andrey continued to create the comic fund as part of the entire comic center "BubbleTeka" at the SMART library named after A. A. Akhmatova.

Andrey was nominated for the Moscow Masters professional skills competition for the Best Moscow Librarian profession, which result was the first place among the librarians of the Western Administrative District and second place overall.

As a result, a TV project appeared on the "Pyatnitsa" (Friday) TV channel as part of the Friday NEWS program called Extracurricular Reading, where Andrey talks about the most relevant, time-tested books and comics. A series of meetings appeared at the Mayak radio station as part of the programs "Time toGo Home" and "Physics and Lyrics", during which Andrey talks about the comic formation history as the cultural phenomenon and industrial lever.

In autumn 2019, the Comics Center hosted the Superheroes Race comic festival, where the Moscow residents met with the Russian comic book artists and screenwriters, science fiction writers and foreign artists, the best cosplayers and lecturers in Russia.

The comics center also launched the Silver Age Poets: Graphic Novel project, where Akhmatova: 6 Stories became the first graphic novel. The graphic novel was published jointly with the Department of Culture of Moscow and Eksmo AST publishing house. This novel was painted by Askold Akishin, and the script was written by Dennis Dvinsky. Later My name is Gumi-Lev was released. The plans include Mayakovsky: How to Make Verses, as well as the stories of Marina Tsvetaeva, Osip Mandelstam, Daniil Kharms and many other significant figures of Russian culture.

For the first time in the history of the Nashestvie rock-festival and with the direct support of Nashe Radio, the first library Biblioshater was organized on the field of the festival. One thousand eight hundred books were distributed to the guests of the festival; five lectures were given, four quizzes were held, about 10 thousand people became the site's guests. The library has shown that it is interesting at such an unusual event as the rock festival.

Receiving the Headliner of the Year award in the Culture and Art nomination became recognition of the library's activities, proving how greatly the Russians support and respect comics.

Are Comics an Art?